Explore the History of Burlingame

The earliest documented European contact with what is now the Burlingame area was made by the Juan Bautista de Anza expedition in 1776.  Although earlier Spanish expeditions had passed through this area, notably the Portolá expedition in 1769, de Anza is the first to have camped in what is now Burlingame.  In his diaries, de Anza refers to the dry arroyo “half a league” north from “arroyo San Matheo.”  It can be assumed that this is what locals now refer to as Burlingame Creek.  From that date, the Spanish missionaries developed the San Mateo/Burlingame area as the farm to support their mission in San Francisco.  With the advent of Mexican independence in 1822, the mission lands were secularized and the southern Burlingame area was part of a land grant, known as Rancho San Mateo, given by Governor Pio Pico to his secretary, Cayetano Arenas.  Arenas had hardly taken possession of the land when the uprising in Sonoma that led to the founding of the Bear Republic caused him and his father to dispose of the land to a San Francisco based mercantile company, Howard & Mellus.

William Davis Merry Howard soon bought out his partner, Henry Mellus, planning to retire to the country to live in splendor with his young wife.  Following his death eight years later in 1856, his estate was divided into thirds, one third for his wife, Agnes, one third for his son, William Henry Howard, and one third for his father-in-law, Joseph Henry Poett.  At this point, several conflicting pieces of information create some confusion regarding the exact sequence of events.  According to maps dated May 13, 1866 and 1868 on file with the San Mateo County Recorder’s Office, it was Joseph Henry Poett who sold Anson Burlingame a portion of his allotment of the Howard property for the creation of his estate.   There was also a deed, dated May 30, 1866, which covered the sale of the land by Poett to Burlingame for $54,757.50.  However, there was an additional deed, dated June 2, 1866, which covered the sale of the same land by Burlingame to Ralston for the sum of $1.00.

Multiple sources indicate that it was through William C. Ralston that Anson Burlingame became aware of the desirability of an estate on the Peninsula.  Ralston, a founder of the Bank of California, made his fortune in the development of the Comstock Lode.   He admired the Peninsula’s warm, tranquil setting of oak-clad rolling hills nestled between San Francisco Bay and the Pacific Coastal Range and created his magnificent estate at Belmont.   One of the many famous guests invited to Ralston’s estate was the United States Minister to China, appointed by President Lincoln, the Honorable Anson Burlingame.   Following Anson Burlingame’s death in 1870, D. O. Mills became the guardian of the Burlingame estate, and according to a January 29th, 1872 map also on file with the County Recorder’s Office, Mills sold the property to Ralston.

According to the account in Constance Lister’s 1934 manuscript “A History of Burlingame,” however, Ralston purchased the property where Burlingame now stands to the southern limits of the old Buri Buri Rancho from Joseph Henry Poett, who inherited the property from his son-in-law, William D. M. Howard.  She further states that it was Ralston who gave Burlingame a site for a future town on his holdings west of El Camino Real to be known as the Town of Burlingame in 1868.  This conflicts with an account in the San Mateo Gazette of June 13, 1874, which states that Messrs. Sharon and Ralston had just purchased 400 acres of Burlingame’s land where they had begun plans to lay out a town. 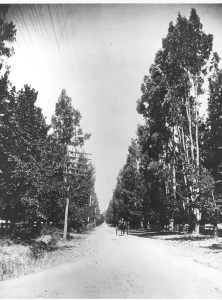 Though some survey work was undertaken, and several local property owners hired John McLaren, head gardener for the Howard Family, to landscape their frontages on El Camino Real with elms and eucalyptus, no actual construction had begun by the time of Ralston’s death in 1875.  At that time the property was taken over by his partner, William Sharon, who used the property as a dairy farm to supply the Palace Hotel in San Francisco, which he had also acquired at Ralston’s death.

Following the death of Senator Sharon, his son-in-law, Francis Newlands, assumed control of the property.  It was Newlands who finally began the subdivision of the property, beginning with the Burlingame Country Club and the surrounding five cottages in 1893, and followed quickly by the creation of the Burlingame train station in 1894.  A map, dated March 15, 1897 and titled Map No. 1 of the Town of Burlingame, showed the layout of the town covering the area from El Camino Real to Dwight Road and Peninsular Avenue to Burlingame Avenue.  In 1901, the first two stores opened for business on Burlingame Square, across from the train station. 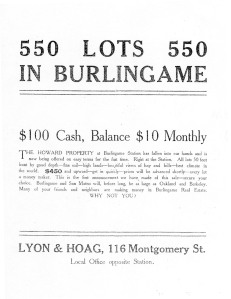 The town grew slowly until 1906, when the San Francisco earthquake and fire sent hundreds of people in search of a safe residential area.  Burlingame was the choice of many, and the town was incorporated in 1908.  The year before incorporation, the volunteer fire department was established, and in 1909, came the establishment of the first library.

The central section of Burlingame, stretching from Sanchez Creek in the south to Mills Creek in the north, was created by the annexation of the Town of Easton in 1910. This land originally was a portion of Rancho Buri Buri, a land grant of some 15,000 acres that had belonged to José Antonio Sanchez beginning in 1835. Upon his death in 1843, the Rancho was divided among his 10 children, the southernmost section going to his son, José Isidro (Chino) Sanchez.  By 1854, financial problems had caused him to lose the property, and in 1860, Ansel Ives and Adeline Mills Easton purchased the land and created their Black Hawk Ranch.

It was the Eastons’ son, Ansel Mills Easton, who subdivided the estate and created the town of Easton.  The earliest map of the subdivision found on file with the County dates from 1905, delineating an area from California Drive to El Camino Real and Sanchez Creek to Broadway, designated as Easton Addition No. 1.  Mr. Easton built a store at the corner of Chula Vista and Buri Buri (now Broadway), and, as the town expanded, established a public school at Cortez Avenue and Easton Drive in 1908, and a train stop, originally called Easton and later renamed Broadway.  He also established his own streetcar service which began operation in 1913, running from Carmelita Avenue and California Drive to Hillside Drive and Alvarado Avenue, in an attempt to attract settlers.   However, despite his efforts, sales of residential lots were slow, and in 1918, the line was discontinued.  It was not until the 1920s that there was a rush of activity in the area.

The northernmost section of Burlingame was established by the annexation of the major portion of the estate of Darius Ogden Mills in 1954.  The land, from Mills Creek in the south to Millbrae Avenue in the north, was also originally part of the Buri Buri Rancho, and was inherited by José de la Cruz Sanchez  in 1843.  Like his brother, Chino, he was plagued by financial problems and lost his property, which was bought by Mills and his wife around 1860.  A magnificent mansion was built and the home was enjoyed by three generations of the Mills family, largely as a vacation retreat, until the 1950s.  The heirs of D. O. Mills sold the property to the Trousdale Development Corporation, and following a prolonged dispute between the towns of Burlingame and Millbrae over annexation, in 1954 it was decided to divide the property along what is now Murchison Drive, the southern portion, from Mills Creek to Murchison, going to Burlingame and the northern portion, from Murchison to Millbrae Avenue, going to Millbrae.  In addition to the residential area that was created west of El Camino Real, a commercial and light industrial complex was developed on the eastern section of the estate.

After more than 100 years, Burlingame retains the very qualities that impressed and attracted its first residents.

W. D. M. Howard and Agnes Poett Howard were the first to build a large estate on the mid-Peninsula, that stretched from Sanchez Avenue in modern-day Burlingame to San Mateo Creek, near downtown San Mateo, and from the Bay to today’s Interstate 280.  Son William H. Howard was a member of the Burlingame Country Club, and when members wanted to replace the flag-stop shelter at Oak Grove with a proper train station to welcome their visitors, Howard donated the land for what would become the city’s architectural landmark. His half-brother George H. Howard, Jr. and Joachim B. Mathisen developed its iconic design, derived in part, from A. Page Brown’s temporary “California Building’” at the Chicago World’s Fair in 1893.

Southern Pacific agreed to provide funds for an “ordinary” depot if the Club paid the difference for something more elaborate. The result was “a very picturesque Spanish Structure,” in the news of the day. The building cost $8,000 and opened officially on October 10, 1894 under Stationmaster Ben Wright. It featured a square tower, a hipped roof, Moorish decoration on the main arch, unique quatrefoil windows and authentic California Indian roof tiles, salvaged in part from the ruins of Mission Hospice on the Howard property in San Mateo, as well as from the Mission San Antonio de Padua, in Monterey County. Burlingame’s depot was the country’s first permanent Mission Revival-style building.

Succeeding Wright and M.L. Masteller as a stationmaster, George W. Gates arrived in 1895 with his bride and settled into the station’s living quarters. Gates’s son, Stan, recalled that in the early days, with no stores in Burlingame, passengers would bring groceries and goods from San Francisco for the young family. By World War I, the building was a hive of commuter activity for the town that evolved around the depot.

In 1923, Mose D. Lehrfeld became station agent and his family lived in the station quarters for three years.  Among the famous visitors was Mary Pickford and the cast of “Little Lord Fauntleroy,” being filmed at the Kohl Estate.

Until the 1950s, an agent lived in the station quarters; the space was later leased to a variety of tenants, including the Burlingame Chamber of Commerce from 1987 until 2011.  In 1971, on the basis of is architectural style, the Burlingame station was designated a California State Registered Landmark, the first station so honored. In 1978, it was listed on the National Register of Historic Places.

In June 1986, the city and its Save Our Station Committee held a festival to celebrate the restoration of the depot, completed in cooperation with the Office of the State Architect and Caltrans. A centennial celebration was held in September 1994.  The ticket office was staffed by an agent until 2004.

After it closed, the Burlingame Historical Society approached Caltrain about the possibility of creating a local history museum in the building. The Burlingame Hillsborough History Museum opened in 2008.

The station underwent a $13 million upgrade project in 2007, which included platform reconfiguration and the installation of several new mission-style shelters and period appropriate plantings.